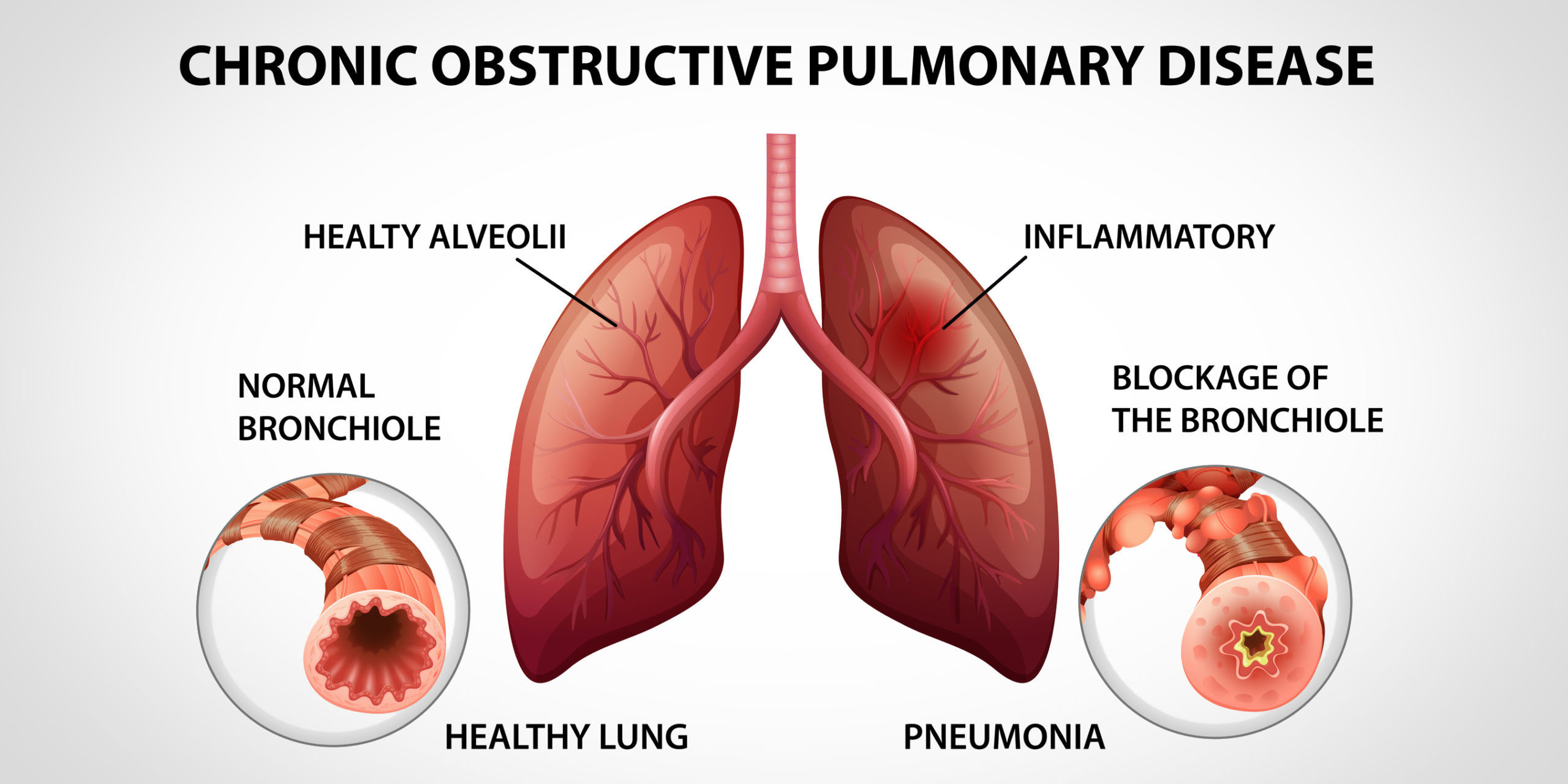 If you or someone you know has recently received a COPD diagnosis, you may be wondering what exactly that means. COPD stands for Chronic Obstructive Respiratory Disease. COPD is composed of different respiratory diseases that cause troubled breathing.

The term COPD can be used to describe a singular respiratory disorder, or more than one. COPD encompasses chronic bronchitis, emphysema, asthma, and some forms of bronchiectasis, as well as any combination of the four. According to the American Lung Association, over 16 million Americans are diagnosed with COPD as of October 2020, but millions more suffer from it without being diagnosed.

The group of diseases in which COPD refers to cause airflow obstruction and trouble with breathing. COPD is chronic, meaning it is long-lasting and constantly present. Each individual case of COPD is different, and some cases are more severe than others. The most common cases of COPD include symptoms of both chronic bronchitis and emphysema. What is Happening in Your Body?

Your particular case of COPD will determine what is happening within your body. Cases that include chronic bronchitis will cause swelling and increased mucus production in the lung airways, or bronchial tubes. This causes breathing to become more difficult since your airways are inflamed and narrowed with mucus blocking them. Cases including emphysema cause destruction of the air sacs, or alveoli. The air sacs are responsible for oxygen exchange within the lungs, and they lose their elasticity by becoming destroyed. This causes breathing difficulty since the loss of elasticity leads to air being trapped inside the air sacs, making it harder to get oxygen in and carbon dioxide out.

Some of the most common symptoms include:

Remember, not all cases of COPD will have the same symptoms. Other symptoms include frequent respiratory infections, lack of energy and unintended weight loss.

COPD is mainly caused by inhaling lung irritants, and smoking is the #1 cause. People, however, do not realize that other potential lung irritants that can also cause COPD include exposure to air pollution, fumes, chemicals, secondhand smoke and dust particles. Oftentimes, inhaling these irritants can be work-related. Working in construction, mining or welding are examples of occupations that increase the risk of obtaining COPD due to increased exposure to lung irritants. A rare genetic factor called alpha-1 antitrypsin deficiency is also known to cause COPD and is passed from parents to their children.

One reason for these additional problems may relate to the lung inflammation that occurs in people with COPD.

What is a COPD Flare-Up?

A COPD flare-up, or exacerbation, is when your symptoms are considerably worse than usual. Some can be treated at home, but more severe flare-ups can require a visit to the hospital. Flare-ups are triggered by further lung inflammation. This can be from exposure to smoke, pollution or allergens as well as contracting the flu or pneumonia. Symptoms to look out for include:

Those symptoms can usually be treated at home with antibiotics or inhalers, but the following list of symptoms require professional help:

Does COPD Have a Cure?

A COPD diagnosis can be frightening, especially when the patient learns that this is a progressive disease. This means that it gets worse over time. Unfortunately, there is no cure, but luckily many treatment options are available to improve the quality of life. Bronchodilator and steroid medications are available through inhalers to relax the lungs, as well as oral anti-inflammatory medications.

Oxygen therapy is also a popular treatment option to help patients achieve healthy blood oxygen levels, which is difficult to maintain when you have COPD. Oxygen therapy allows you to still be active and live a normal life while getting the oxygen into your body that you need, especially with the availability of portable oxygen concentrators. Pulmonary rehabilitation is another option for those with COPD. It helps patients adjust to and get educated about their conditions. Pulmonary rehabilitation programs often provide support and exercise training as well as breathing techniques that are personalized based on specific patient needs.

Living with a COPD Diagnosis

A COPD diagnosis doesn’t need to stand in the way of an active, happy life. Activities of daily living, such as completing chores or bathing, can be harder to accomplish due to shortness of breath. You may have to take constant breaks to catch your breath. Activities will take your energy to perform, so you will get physically exhausted more easily. Living with COPD means slowing down in order to control your breathing and to prevent tiring yourself too quickly. Living with COPD has its challenges, but modifying some activities of daily living can improve your quality of life and help you better manage your disease.

A COPD diagnosis is serious since this is a life-long condition, but you can still live a fulfilling life with the help of treatment options, although you may have to slow your pace. COPD takes a toll on your body, so taking care of yourself, monitoring your symptoms and following your doctor’s orders are top priorities.

Go to Top
We use cookies to ensure that we give you the best experience on our website. If you continue to use this site we will assume that you are happy with it.Accept